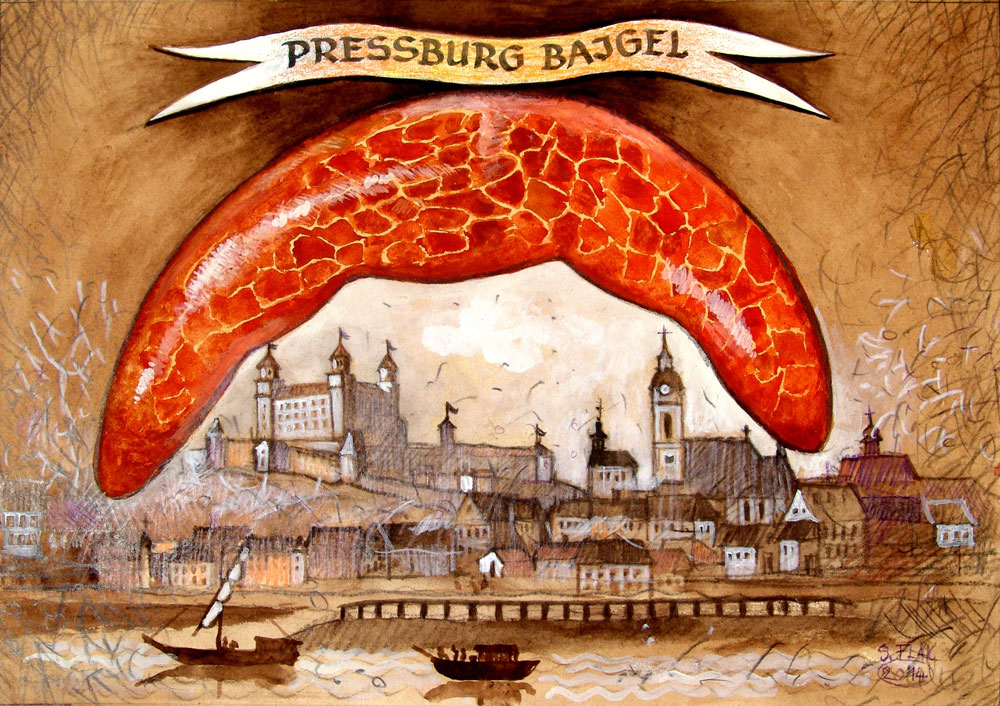 Our company Pressburg Bajgel holds in its name a piece of history of the old Bratislava. That is why we decided to give the citizens and visitors of Bratislava the beautiful aroma of freshly baked long forgotten     Pressburg bajgel. Our aim is to offer the customer an original jewel of     Pressburg - the Pressburg Bajgel. We produce our bajgels according to the original recipe originated in 1890 to 1900. Each bajgel is made exclusively by hand and with love. We hope that you will love our bajgels and spread the word of this jewel. The brand Pressburg Bajgel has been registered as a trademark in July 2015 in the Register of Industrial Property of the Slovak Republic as a trademark. Bajgle and other household products you can also find it in a stone shop in the Old Town on Lazaretská street 36.We're looking forward to your visit, your Press­burg Bajgel.

According to old accounting books, pastries filled with poppy seeds or walnut sold in Pressburg around year 1590. This fact confirms the existence of Pressburg bajgel deep in the past. Modern pastry fame begins at the end of 18. century. Bratislava's urban documents state that baker Viliam Scheuermann exhibited the specialty called Pressburg bajgel for the first time in year 1785 on Saint Nicholas Day in his bakery on Hviezdoslav's Square . Poppy and nut stuffed rolls had been sold out immediately and because of their distinctive taste and smell they also got popular in Vienna as Pressburger kipfel and in Budapest as Pozsoyni kifli. This fragile treat with a characteristic shiny surface has become unique mostly because the filling makes up almost half its weight and the roll stays fresh for weeks. The nut roll must have the shape of a moon and a poppy seed roll has a shape of a horseshoe. The Pressburg bajgels have gone far beyond the ocean, and it has been said that they stayed fresh throughout the whole journey to America. At the turn of 19th and 20th century, the Gustav Wendlers company baked the rolls. Bakery owner at Štefánik Street supplied the baygle to the imperial table in Vienna. As a Pressburg German, he managed to avoid expulsion after World War II, but he commited suicide after privatization and demolition of his bakery. Bratislava is also famous for its Bratislava honey cake, and Bratislava cracker, but the Pressburg bajgel is in the lead. The roll is not only sold in Vienna and Budapest as Pressburger or Pozsonyi but also in Bratislava cafe on Rue de Presbourg in Paris. This jewel should be Bratislava's typical delicacy, just as the Vienna's Sacher cake and the Budapests Somloi galuska.